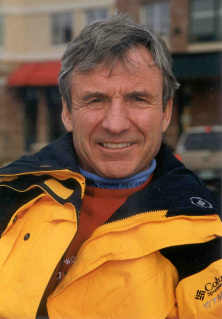 Jimmie Heuga September 22, 1943 - February 8, 2010
Jimmie tapped the goal-setting skills her learned from Coach Beattie and built a fitness and wellness program based on exercise and positive thinking. At the same time, the progress of the disease slowed significantly, suggesting that exercise, though no cure, had deterred the debilitating effects of MS.