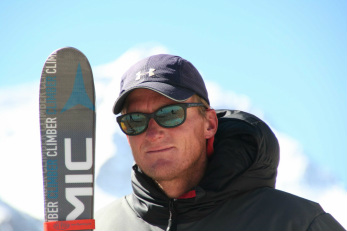 Mike Marolt
In May 2000, after a childhood growing up in Aspen and climbing and skiing in Colorado’s Elk Mountains, twins Mike and Steve Marolt climbed and skied the central peak of Tibet’s Shishapangma.  This marked the first time a person from the Western Hemisphere climbed and skied from 8000 meters (26,000 ft).  Since that time, Mike and Steve have become the only Americans to do this multiple times, preceded by just four other people in the world.

Mike’s ski heritage starts four generations ago when his family arrived in Aspen Valley.  Beginning as simple miners and barkeeps, the family became ranchers and eventually world class skiers.  Mike’s father, Max Marolt, joined the US Olympic team in 1954 and skied in the Squaw Valley Winter Olympics in 1960.  Max’s career in the ski industry spanned 60 years, and he and his brother Bill have both been inducted into the Colorado Ski Hall of Fame.

Mike’s passion as a ski mountaineer has been complemented by a professional career as a CPA, and a second career as an independent filmmaker.  Mike has produced six  adventure documentary films, including SKIING EVEREST, which won the Ski Channel’s Best Adventure Film of the Year in 2010, and has premiered all over the country, most recently on ESPN

Helping People Live with MS
It was during his childhood that Mike met another famous Olympic skier, 1964 bronze medalist Jimmie Heuga.  Mike was impressed as much by Jimmie’s kind, compassionate nature as by his ski prowess.  Jimmie and silver medalist Billy Kidd became the first American men to win Olympic medals in downhill skiing.

While still a teenager, Mike recalls when he and his father Max ran into Jimmie in the gallery at a world cup race, and were asked to help him get to his car by carrying him to the vehicle.  That was the first time Mike came in direct contact with the devastating effects of multiple sclerosis.

This single experience led Mike to support the cause when asked by Jimmie to “fight the fight against MS” through participation in ski events which raised money for Jimmie’s charity.  Jimmie, who passed away in 2010, had challenged Mike and other young people like him to pick a fight, “any fight, cancer, homelessness, starvation, anything” and help “knock out all the terrible diseases and conditions” in the world.

Today, Mike donates his time and talent in support of the Jimmie Heuga Legacy Foundation.  This fund is dedicated to the long-term financial support of programs based on Jimmie’s MS care philosophy.  It also provides a living legacy for the inspirational pioneer and founder of the Jimmie Heuga Center for MS.

Mike (Milty) Miltner helps Jimmie ski.
Jimmie Heuga
Mike’s latest film marks another of his passions; honoring the life and legacy of his friend Jimmie Heuga.  This new film is a documentary on Jimmie’s life and his impact in the world.  Can Do: The Legacy of Jimmie Heuga tells how a world class athlete conquered his fear of living with MS by pioneering a philosophy of care focused on exercise and nutrition. Today, Jimmie’s methodology of treating the whole person is widely used by MS care experts around the country.

This film is Mike’s personal dedication to the man who taught him, by example, that each of us can make a difference.  Mike believes this inspirational story will help motivate people living with a chronic disease like MS to do what Jimmie did, to “take the cards you have been dealt, and make the most of your situation”.

Mike challenges every person to pick a fight and be inspired by Jimmie’s philosophy of realizing the power of what you ‘can do’.